First of All: What exactly is an Albergo Diffuso?

Travellers searching for a luxury hotel room off the beaten track are increasingly finding that their perfect suite is a peasant’s cottage, and the reception is in the cowshed.

The Italian concept of alberghi diffusi, literally “spread out hotels”, which involves hotels taking over stunning but dying villages, is catching on across Europe. Devised in the 1980s in northern Italy, where hamlets abandoned after an earthquake were brought back to life, there are now about 120 villages turned into hotels in Italy. “This trend is accelerating and about six or seven new ones are opening in Italy every year,” Giancarlo Dall’Ara, the head of the Italian association of alberghi diffusi, said.

Bloomberg: Is Your Town Nearing Extinction? Try Turning It Into a Resort

Welcome to the world of alberghi diffusi, where tiny villages are going all-in on tourism to save themselves.

“The rise of scattered hotels”

How did The idea of scattered hotels start?

The idea of scattered hotels got its start in the early 1980s. Hotel marketing consultant Giancarlo Dall’Ara got the inspiration for scattered hotels while trying to revive tourism in an earthquake-damaged corner of northeastern Italy in the 1970s. Dall’Ara is still involved in the alberghi diffusi movement as the president of the National Association of Alberghi Diffusi. This is the organization that certifies new scattered hotels, and the group’s reach has spread beyond Italy. In 2018, for example, Dall’Ara traveled to Okayama, Japan to officially add the Yakageya Inn to the list of authentic scattered hotels.

Having an active organization promoting this unique vacation option is important because the requirements help authentic places stand out, even in a sea of other options.

Also called a “widespread” or “scattered” hotel, a “hotel diffuso” (albergo diffuso, in Italian) is the name given to a network of accommodations spread over a geographic area.

The concept of a hotel diffuso was born in Italy. After a 1976 earthquake in the town of Friuli, abandoned houses were renovated for this purpose with post-earthquake relief funds. This region still has the largest has the largest number of hotels diffusi.

First developed by Professor Dall’Ara (a tourism marketing professor), the concept has spread to other countries in Europe. In towns with historic centers, the novel model has transformed formerly deserted or unused buildings to make them habitable and economically viable. It also helps overcome community resistance to the creation of new accommodations in popular tourist areas.

In the 1980s, Italian hotel consultant Giancarlo Dall’Ara made a similar observation while wandering through towns in the Friuli region, in northeast Italy, which was devastated in 1976 by an earthquake.

Where others saw crumbling, desolate villages, Dall’Ara saw a missed opportunity. With a dual aim of preserving the heritage architecture and injecting new economy into the villages, he developed a tourism model: Albergo Diffuso (loosely meaning “scattered hotel”).

Why Stay in a Hotel When You Can Stay in a Village?

Now a fixture in Italy, alberghi diffusi seem to be a win-win: Former residents can lease empty properties for another income stream, and travelers experience village life first-hand. While the houses are peppered about town, there’s usually a central reception (which often doubles as the town tavern), and a mix of hotel-esque services.

“Alberghi Diffusi have incentivized young people to come back [from cities or abroad] to the villages and renovate their family homes, [which they can then lease out to the hotelier],” said Dall’Ara, the president of the Alberghi Diffusi National Association. “The sustainable concept also enables foreign travelers to come and “live” in the villages and get a feel for local life. The concept also contributes to the birth of new businesses and activities such as restaurants, artisan crafts, shops, B&Bs, tours.”

From Italy to Croatia, Switzerland, Tasmania, the U.S. and even the Himalayas, various iterations of scattered hotel concepts have since sprung up around the world. These countryside cabins, beachfront dwellings, and heritage village homes showcase a new type of luxury.

… set about transforming the grottoes on the Civita hill into “the project of his dreams”: an 18-room super-luxe albergo diffuso, or scattered hotel.

This “diffused hotel” movementhas played a big role in preserving ancient towns and structures, the businessman-conservationist told the Times, “Tourism screws up the identity of a place… The only way to solve this contradiction is to make sure you are obsessive about the identity of the place.”

Looking for a more authentic Italian holiday? Forgo the big cities and chain hotels and tap into one of Italy’s best-kept accommodation secrets – the “alberghi diffusi”.

Staying here is about experiencing the frugal beauty and simple life of a medieval village, with a few modern comforts thrown in. This is a “scattered hotel”, which means reception, restaurants and bedrooms occupy different ancient buildings restored with local materials and diligent historic accuracy. http://www.telegraph.co.uk/travel/destinations/europe/italy/hotels/sextantio-albergo-diffuso-hotel/#

The albergo diffuso model— in which abandoned apartments are turned into a scattered hotels is also making a headway probviding income for the towns as well as jobs for the locals. The brainchild of Giancarlo Dall’Ara, the scheme is providing popular in Puglia down in the heel of Southern Italy, wich has seen mass emigration over the past few decades. Julia Buckley “The Times of India” Feb 16, 2019
http://timesofindia.indiatimes.com/articleshow/68018155.cms?utm_source=contentofinterest&utm_medium=text&utm_campaign=cppst

When a Borough becomes an Hotel

Scattered hotels made in Italy:

A new formula for your vacation:

Wired to the World

The most important element characterising the albergo diffuso model is the fact that it is perfectly integrated with the local territory and community:

Live Like a Local in an Italian ‘Albergo Diffuso’

When the Hotel is the Town: Albergo Diffuso in Italy 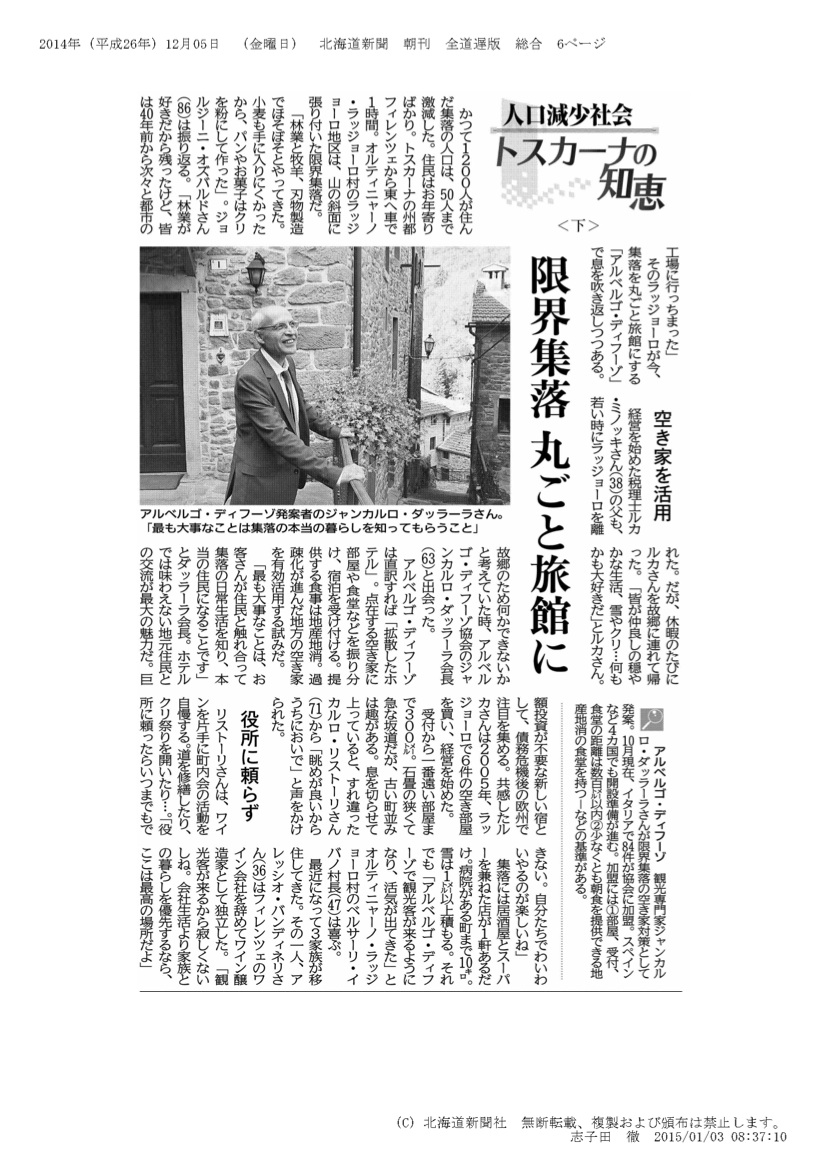 The albergo diffuso model— in which abandoned apartments are turned into a scattered hotels is also making a headway probviding income for the towns as well as jobs for the locals. The brainchild of Giancarlo Dall’Ara, the scheme is providing popular in Puglia down in the heel of Southern Italy, wich has seen mass emigration over the past few decades. Julia Buckley “The Times of India” Feb 16, 2019
http://timesofindia.indiatimes.com/articleshow/68018155.cms?utm_source=contentofinterest&utm_medium=text&utm_campaign=cppst